Use of the Simple Pluperfect

1. What is the use of the Simple Pluperfect in spoken & written Portuguese?

2. Additionally, why is it that the Compound Pluperfect (also known as the 'Past Perfect') is preferred over the Simple Pluperfect, when in fact, the latter is incredibly easy to form? For example:

(The below examples use the Simple Pluperfect):

(The below examples use the Compound Pluperfect / Past Perfect):

Thanks much for your responses in advance.

Perhaps the most common use of the mais-que-perfeito simples in common speech is in three idiomatic expressions, where in fact it is not used as mais-que-perfeito at all: pudera, quem me dera, and tomara (eu), tomaras tu, tomáramos nós, etc. Credit to Artefacto who thought about it first.

Pudera is an interjection meaning it couldn’t be otherwise! What else would you expect?!

Quem me dera means I wish, I’d love (something that’s not going to happen):

Quem me dera ter um cão! Mas vivo num apartamento pequeno e teria que o deixar sozinho o dia todo. (I’d love to have a dog! But I live in a small flat, and would have to leave it alone all day.)

Quem me dera ser um pássaro! (I wish I were a bird!)

Lastly, tomara is an interjection meaning I hope, I wish, I’d love, I'll be happy if:

"O teu ex-namorado disse que iria chegar tarde." ─ "Tomara eu que ele não viesse de todo." (Your ex-boyfriend said he would be late." "I'd be happy if he didn't turn up at all.")

Now, why do people use the compound pusperfect rather than the simple one. I don't know that, but iIn fact the compound pluperfect is easier. You only have to know the past participle of the main verb (the one you want to conjugate), and you have to know it anyway for other things, and the verb ter. You can also use the verb haver instead of ter as auxiliary: ela havia cozinhado, tu havias feito. It is fairly rare though.

There is also a little issue with the simple pluperfect: in the third person plural it is the same as the simple past, pretérito perfeito, which could possibly be confusing. Compare:

The two sentences mean the same, but in the sencond you have the same word, encontraram, to convey different tenses for the same person. It does not lead to confusion in this case, but it migh be ambiguous in others. 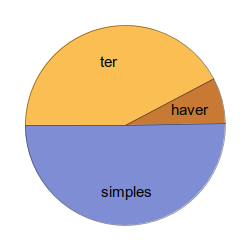 Not the answer you're looking for? Browse other questions tagged português-europeu or ask your own question.

7
Equivalent expression for "Why buy the cow when you can get the milk for free"
9
Is "farnizim" the same as saying "frenesi"?
8
Use of the word "ecrã"
7
What's the meaning of "Maçarico" in European Portuguese?
0
How did the Portuguese language end up being spoken in several African countries?
2
Use of the Personal Infinitive
3
Use of articles and vocabulary choice for 1970s in Portugal
2
What is the difference between 'legumes' and 'vegetais'?
9
Nós estamos - how to pronounce the "s"