How can I translate "Survey" and "Surveying" into Brazilian Portuguese?

I am working on a menu for a form selector and need to figure out a few terms into Brazilian Portuguese. These are options within the form.

These are also stand alone options so no additional context or examples will be given as if I laid down examples with it's usages within sentences, it would defeat the purposes of what I am trying to get as an answer.

Again, they are stand alone options within a form builder. I have considered "Campos de Inquerito", "Campos de Pesquisa", "Ferramentas de PEsquisa", but wonder if there are better options. Also when it comes to "Survey" or "Surveying" I'm not sure what to consider. Is there even a 'single' translation word that we can use it in Brazilian Portuguese?

Forms are a common application in Brazil and there are a few translations that have become well-known by the general public. The preferred translation for survey seems to be questionário, as evidenced by my overflowing inbox: 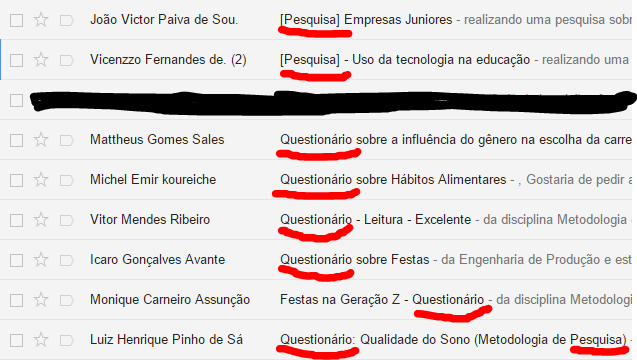 Following that rationale, Survey Fields and Survey Tools would translate to Campos de Questionário and Ferramentas de Questionário, respectively. The downside of this is that Surveying doesn't have a direct translation, but you can express actions with an auxiliary verb: Aplicando Questionários.

As you could see in my inbox picture, Pesquisa is also a popular term, and it is just as good. If you go with it, then Survey Fields, Survey Tools and Surveying will translate to Campos de Pesquisa, Ferramentas de Pesquisa and Pesquisando, respectively.

Pesquisa was Google's choice for localizing its Forms web application:

Based on Cambridge Dictionary Survey is:

Not the answer you're looking for? Browse other questions tagged português-brasileiro tradução or ask your own question.

// TODO sg: TMP solution until we are confident in our current implementation of async imports // once we are, we can move the if into the js entry file and dynamically load the mark obsolete module