They appear to work like adjectives: O meu carro, o carro branco, matching the gender of the object possessed and admitting use of the definite article.

pronomes adjetivos
Share
Improve this question
edited May 28 '16 at 20:14

The short answer is that it has both; it just depends how you use them.

This is a somewhat broad topic with lots of regional variation. Because I'm not sure where you are in your studies, I will answer with just an abbreviated outline that I hope will help you as an English speaker learning Portuguese.

The determiners work a bit like adjectives in that they modify a substantive (noun) but are not substantives in and of themselves, so they cannot be the subject of a clause. They do have to agree with their noun.

The basic paradigm is by person, number, and gender, from pt.wikibooks.org: 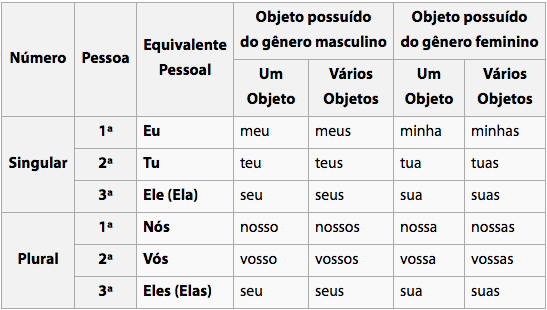 If you use those as possessive determiners, as in “(o) meu amigo” meaning “my (male) friend” or “(as) nossas amigas” meaning “my (female) friends”, the definite article is not obligatory. Brazilian speakers often omit it altogether.

However, when you use those words as possessive pronouns, you more commonly use the article, especially in Portugal. For example, “Tens o meu?” means “Do you have mine?” and “Viste as minhas?” means “Did you see mine?”

Here are just a few of the many ways these can trip you up:

Not the answer you're looking for? Browse other questions tagged pronomes adjetivos or ask your own question.

12
Does Portuguese have remnants of a case system?
11
When to omit personal pronouns?
4
Are "atraente" and "atrativo" always interchangeable?
4
Pronoun syntax w/ certain verbs (EU Portuguese)

// TODO sg: TMP solution until we are confident in our current implementation of async imports // once we are, we can move the if into the js entry file and dynamically load the mark obsolete module